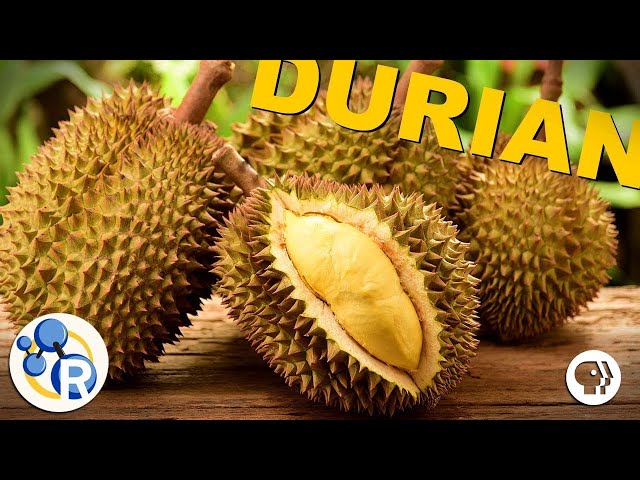 Ever wondered what durian smells like? Here’s a blog post that describes the smell of durian fruit and why it’s so polarizing.

If you’ve ever been curious about what durian smells like, you’re not alone. This strange-looking fruit has a reputation for being both delicious and smelling like death. So, what gives? Let’s explore the stinky world of durian together.

Durian is a large, spiky, tropical fruit that is notorious for its strong smell. Some people say it smells like rotting flesh while others say it smells like sweet custard or almonds. The taste of durian is often described as sweet and creamy, with a faint hint of bitterness.

The durian fruit is native to Southeast Asia, and it is most commonly found in Malaysia, Indonesia, and Thailand. Durian trees can grow up to 50 feet tall, and they produce large fruits that can weigh up to 7 pounds each.

If you’re ever in Southeast Asia, you’ll probably see durian for sale everywhere you go. And if you’re brave enough to try it, you’ll definitely never forget the experience!

The durian is a tropical fruit that is known for its strong and pungent smell. Some people say that it smells like rotting flesh, while others say it smells like sewage or onions. Whatever you think it smells like, there’s no denying that the durian is one of the stinkiest fruits in the world!

Have you ever been walking through an Asian market and suddenly been hit with the most intense, pungent smell? Chances are it was durian. This strange and controversial fruit is notorious for its incredibly strong aroma, which has been described variously as “rotting garbage”, “ sewage”, and “a mixture of onion and cheese”. So why does durian smell so bad?

The answer lies in its chemical composition. Durian contains high levels of a sulfur-containing compound called mercaptan, which is also found in skunk spray. Mercaptan is a volatile compound, meaning that it easily evaporates and wafts into the air, where it is quickly detected by our noses.

Interestingly, not everyone finds durian to be unpleasant-smelling – some say it smells sweet or fruity. This may be due to individual differences in our ability to detect different odors, or it may be that durians from different regions have different levels of mercaptan. Whatever the reason, there’s no denying that durian is one stinky fruit!

Is the smell of durian pleasant or unpleasant?

What do people think about the smell of durian?

Most people who have smelled durian fruit describe it as strong and pungent. Some say it smells like rotting flesh or garbage, while others find it sweet and pleasant. Durian lovers often say that the smell is worth the delicious taste of the fruit.

Whether you love it or hate it, there’s no denying that durian is one of the most polarizing fruits in the world.

How does the smell of durian affect people?

The durian is a fruit that is notorious for its strong, pungent smell. Some people love the smell of durian, while others find it incredibly overpowering and unpleasant. However, there is science to back up the claim that durian does indeed have a pleasant smell.

So, what exactly is it about the smell of durian that makes it so polarizing? One theory is that our ability to perceive smelled compounds is determined by our genes. This means that some people may be simply more sensitive to the compounds in durian that create its characteristic smell.

Whether you love it or hate it, there’s no denying that the smell of durian is unique and definitely worth trying if you’ve never experienced it before!

What are some other smells that are similar to durian?

Durian is a large, spiky fruit that is native to Southeast Asia. The fruit has a reputation for being very smelly, and it is often banned from public places because of its pungent aroma. But what does durian smell like, exactly?

So, what does durian really smell like? The answer may surprise you!

While durian does have a strong smell, it is not necessarily unpleasant. In fact, many people who have tried durian say that it tastes better than it smells. Durian is often described as being earthy, creamy, and slightly sweet. It has been likened to the taste of almonds or marzipan.

So, if you’re curious about what durian smells like, don’t be afraid to give it a try! You might just be surprised by how much you like it.

How can you get rid of the smell of durian?

The best way to get rid of the smell of durian is to eat it! Durian is a tropical fruit that is native to Southeast Asia. It is also known as the king of fruits because of its unique taste and smell. The smell of durian is so strong that it has been known to cause headaches and nausea in some people. When ripe, the fruit is soft and brown with a white fleshy interior. The taste of durian is sweet and creamy with a hint of bitterness. Durian is often used in Southeast Asian cuisine, and it can be found in markets throughout the world.

All in all, the experience of smelling durian for the first time is likely to be a Shock, surprise and/or confusion. For those who are able to get past the initial pungent aroma, it’s not uncommon to grow to enjoy the smell of durian. However, it’s important to keep in mind that durian is an acquired taste and some people may never grow to enjoy its distinct scent.