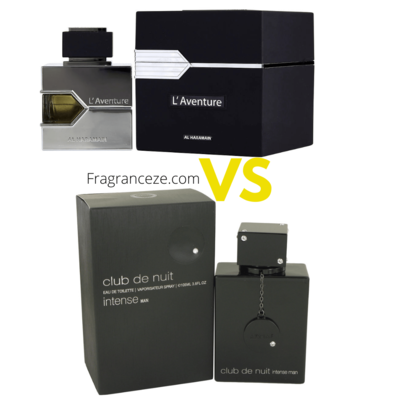 If you are looking to compare Club de nuit vs L’aventure you are in the right place below is our comparison of Club de nuit intense man vs Al Haramain l’aventure.

To start the comparison and to make it easy for you, We will talk about the notes, opening, longevity, projection, versatility..continue reading below.

Pineapple and Black Currant is the only difference for the top notes, The middle and base notes are pretty much similar for both colognes with a touch of Jasmine and Musk & Patchouli. So overall, they are both pretty much similar.

The opening of Armaf Club De Nuit Intense has a lemon fragrance which makes you feel fresh but it goes out quickly. Whereas, the opening of Al Haramain I’Aventure is fresh and clean with a citric burst.

Armaf Club De Nuit is considered to be the best option and the reason is overall. Both scents are good and the top notes can be the decider as they have the same base notes.

If you ask me to pick between Club de nuit intense man vs Al Haramain l’aventure, I would prefer Armaf Club De Nuit Intense Man this cologne is very popular online and classified as the closest thing to aventus (I like Aventus) but the second option would be to buy both colognes to try yourself and make your own judgement, because everyone noise is different.

11 Best Armaf Clones of all the times
Best Tobacco Colognes to buy
Creed Aventus Review - Is Aventus still King in 2021?

Join us on Social Media